Egypt’s newly-elected President Mohammed Morsi addressed his country and the world this afternoon from the historic hall, or grand ballroom, of Cairo University:

The choice of venue was resonant with symbolism: from this hall, newly-elected U.S. President Barak Obama made his speech to the Muslim world.

Egyptian Hany Rasmy [@hany2m] said in an answer to a question on Twitter that this hall was also a favorite of Egypt’s iconic first President, Gamal Abdel Nasser — the place where Abdel Nasser used to listen to the concerts [broadcast live on radio throughout Egypt and the Arab world] of the famed Egyptian singer Um Kalthoum.

Morsi began his speech by recalling his early studies at Cairo University, and his time later teaching there as well. He apologized to students for disrupting exams that had been scheduled at the university during the day, which will be held tonight instead.

In his speech, Morsi said more than once that “elected institutions will resume their roles and Egypt’s armed forces will go back to guard security and country’s borders”.

He also said that “Egypt respects all its treaties + international instruments”.

Morsi, a member of the Muslim Brotherhood for years, resigned from the party on the eve of his inauguration. He is the first Egyptian elected president when, as Cairo commentors noted, the results were not perfectly predictable in advance.

Morsi, running also as the candidate of the revolution that began with protests in Cairo’s Tahrir Square on 25 January 2011, beat Ahmad Shafiq, who had been close to the military regime of deposed President Husni Mubarak, sent out of office on 11 February 2011 after turning over the keys to the military and the Supreme Council of the Armed Forces [SCAF]. Mubarak has just been sentenced to life imprisonment for not preventing the killing of protestors during the revolution, and he was recently reported to be on life support after having a stroke.

Dahiet al-Bariid, as we’ve written before, is divided in two by Israel’s Wall.

Al-Monitor’s caption for this photo reads: “Two boys walk along the wall and past an army watchtower in Dahiat Al-Barid, a West Bank neighborhood on the outskirts of Jerusalem. (photo by Sophie Claudet, Al-Monitor)”.

Yes, well, this exact spot has been granted, after an appeal to Israel’s Supreme Court [an appeal filed by some of the residents of this neighborhood, led by the Christian institutions there], has been ruled to be part of “Jerusalem” [meaning, Greater Jerusalem Municipality, which was created unilaterally by Israel a few weeks after the June 1967 War by carving out a crescent of West Bank neighborhoods running in an arc from Ramallah in the north almost to Bethlehem in the south, all around the Old City of East Jerusalem].

In February 2009, six months after the IDF military watchtower which can hardly been seen in this photo was put in place [in September 2008], sealing this part of The Wall, the IDF removed the awful ar-Ram checkpoint which was down the hill, making movement much easier into Jerusalem.

For the six long months between September 2008 and February 2009, there was only one way in and out, which was through the ar-Ram checkpoint, and at least 30 minutes waiting before leaving, even if only to go to the pharmacy or to buy some fresh vegetables or meat.

The military watchtower [“pillbox” was installed, in a terrible slow ballet choreographed under armed guard while 3 huge round cylinders were slowly driven out of Neve Yaakov, just up the street. It was the beginning of September [and the beginning of Ramadan 2008], and some members of a family were trapped in the “New Mosque” on the Jerusalem side. The armed guards told everybody watching to “go home and watch Baab al-Hara” [a popular Syrian miniseries playing for Ramadan]. But after about an hour, they eventually relented, and opened the doors on the two sides of the cylindrical military watchtower, so the father and his daughter could all make it home.

From that moment, there was no longer any direct passage to the West Bank, and to do that all traffic was redirected to the already-congested and truly terrible Qalandia Checkpint.

END_OF_DOCUMENT_TOKEN_TO_BE_REPLACED

This photo, taken and tweeted by @Falasteeniiya, and posted here, shows the Israeli surveillance blimp hovering right over the huge Beit El compound — which contains the main Israeli “Civil Administration” headquarters in the West Bank, as well as an IDF military base to guard it as well as a huge sprawling area where there are quite a large number of various types of housing for Israeli settler families.

The blimp arrived over Beit El as the evacuation of some homes in the Ulpana area which an Israeli court ordered evacuated by July 1.

Israeli attorney Michael Sfard, who represented the Palestinian owners of this particular patch of land land in court — Beit El, like the rest of the West Bank, is a patchwork quilt of legality, at least in Israeli eyes — told The Wall Street Journal’s Joshua Mitnick this week that he “will not be satisfied until my clients get possession of this land back, and replant their vineyards”.  Michael Sfard’s comment to the WSJ is reported here.

END_OF_DOCUMENT_TOKEN_TO_BE_REPLACED

This beautiful photo was posted on Twitter by “Zalameh” [@BDS4Justice] on Thursday night.  Its caption tells us that it was taken on the Haram ash-Sharif outside al-Aqsa Mosque in the Old City of Jerusalem, and reads: “Aqsa right now #aqsa #palestine”:

A nice photo of Nablus on Friday, by the talented Ahmad Nimer [@ANimer], photographer from Nablus, who seems to be there every weekend.

It’s rather difficult to know what’s really happening in the Sinai.

On Friday, the eve of Egypt’s Presidential election run-off , two Grad/Katyusha missiles were fired into Israel’s Negev Desert north of Eilat. One landed near Mitzpe Ramon, while the other – not immediately discovered until the next day, probably in partly because of the slowdown of activities at the start of the Jewish Sabbath – landed further to the south, in the Arava Region, near the Uvda military base.
Ron Yishai, military analyst for Israel’s YNet, reported here that “the security establishment has ruled out the possibility that it was launched from Jordan”.

Though propaganda and spin are abundant after attacks in this area, reliable and verifiable information is hard to come by. A main reason is the strict control over information exercised by both Israel and Egypt officials after incidents possibly involving their forces there — regarded by as essential to contain the damage, keep relations on an even keel, and protect the peace treaty.

END_OF_DOCUMENT_TOKEN_TO_BE_REPLACED 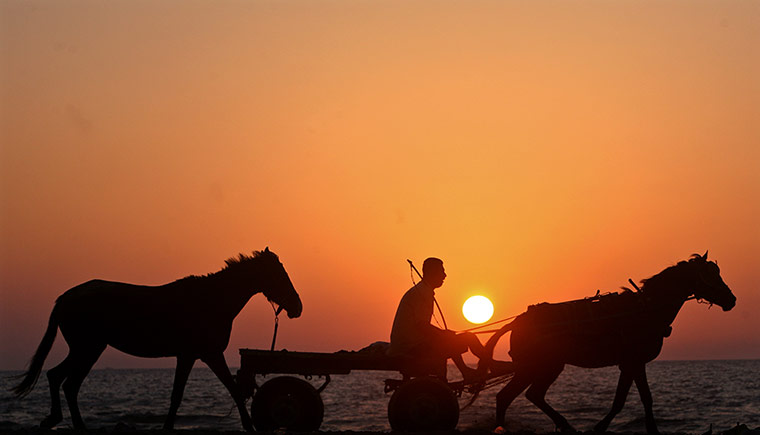 END_OF_DOCUMENT_TOKEN_TO_BE_REPLACED

Amnesty International has today released a new report, entitled “Starving for Justice: Palestinians Detained Without Trial by Israel”. In a press release accompanying the report, Amnesty International says that: “We believe that Israel has renewed at least 30 Administrative Detention orders + issued at least 3 new ones since this [May 15] deal was struck” — this refers to the agreement between a committee of 9 Palestinian prisoners in Israeli jails, and the Israeli Prison Service.

Amnesty says that “Despite many media reports suggesting that Israeli authorities had agreed as part of the deal to release Admin Detainees…at end of their current orders ‘unless significant new information was received’, it’s business as usual…”

Below is a list, from this Amnesty Report, of those 30 renewals of Administrative Detention and the 3 new ones.

The Amnesty International report notes that “Israel has used its system of Administrative Detention … to trample on the human rights of detainees for decades”.

Significantly, this Amnesty International report seems to say that those Administrative Detainees who have been jailed for their political beliefs — and this would presumably include being a member of organizations banned by Israel such as Hamas or Islamic Jihad — are Prisoners of Conscience.

This is a significant category of people whose human and political rights have been violated, for whom Amnesty International mounts world-wide awareness and support campaigns.

Some Prisoners of Conscience could also fall into the category of Human Rights Defenders — a group of people the UN Human Rights Council is bound to defend.

In this report, Amnesty International “calls on Israel to stop using these measures {Admin Detention] to suppress the legitimate + peaceful activities of activists.”

Within hours, the Palestinian Authority’s [PA’s] Government Media Center, headed by Ghassan Khatib [a former PA Minister of Labor and then of Planning, who long headed the Jerusalem Media = Communications Center] issued a statement saying that “we welcome this clear statement that Israel uses detention without trial to prevent Palestinians exercising their right to peaceful protest against the illegal occupation of Palestinian land”.

“Peaceful protest against the illegal occupation of Palestinian land” is a tactic and policy formally adopted by the PA Government headed by Salam Fayyad — and it is also endorsed by Palestinian President and head of Fateh, Mahmoud Abbas, himself, though there is precious little, really minimal, official backing of such protest.

However, that is not the only reason Israel uses “detention without trial”, terminology also used by Amnesty International at least once in this new report on Administrative Detention.

Israel seems to be using Administrative Detention primarily against those Palestinians accused of membership in organizations that Israel not only has declared “illegal” but also “terrorist” — particularly Hamas and Islamic Jihad.

Khatib himself scrupulously avoids using the words “Administrative Detention”… why?

The PA’s Government Media Center statement notes that “Dr. Khatib stressed that the abuse of prisoners is even worse than this report, as it does not address in detail all the violations of Palestinian prisoners that are contrary to international conventions and laws on the protection of the rights of prisoners of war”.

In remarks attributed directly to Ghassan Khatib, the Government Media Center statement says: “This important report exposes human rights abuses practiced by Israel against Palestinian prisoners, and requires immediate and practical steps to implement its recommendations, the most important of which is to release prisoners immediately or given them a fair trial. Amnesty has made clear to the world how Israel breaks international law and breaks agreements with impunity. As this report states, Israel is already breaking the agreement it made to end the recent hunger strike by Palestinian prisoners … The torture of Palestinian prisoners should cause outrage even among those who support Israel. Israel can continue these shameful practices only as long as it feels safe from any serious international action to call it to account. This impunity must end.”

Amnesty International has received the names of 30 Palestinian administrative detainees whose detention orders have been renewed and three who had been issued with new orders since the deal ending the mass hunger strike was signed on 14 May.

Muhammad Shtayyeh, a member of the Palestinian Negotiations team, said in an encounter with journalists in the West Bank village of Dura al-Qarya’ on Monday that the Palestinian leadership is preparing to make a much-discussed move in the UN General Assembly — “soon”.

The move, as Shtayyeh described it, will be to seek recognition of the State of Palestine within the boundaries that existed on 4 June 1967, just before the outbreak of the Six-Day war some 45 years ago.

This is different from the “UN bid” of last September, when Palestine Liberation Organization [PLO] leader Mahmoud Abbas formally requested full UN membership for the State of Palestine.

Because the planned move is different, Shtayyah told this journalist, it will not require either withdrawing the “UN bid” handed to the UN Secretary-General in New York last 23 September, or insisting on a show-down that would end with public Palestinian defeat after the Obama administration made sure it would veto any such step.