UN-Truth is a news /analysis-with-attitude site.

Marian Houk is a veteran freelance journalist, presently based in Jerusalem, a past President (1986) of the United Nations Correspondents Association (UNCA) at UNHQ/NY, and a Member of the Online News Association.

A writer, reporter, journalist and analyst with long experience at the United Nations [in New York and in Geneva and more], as well as in, and with, the Middle East, Marian Houk is the editor, and an author, of UN-Truth.com of Palestine-Mandate.com …

For scale, Marian (find her — in the exact center of the photo) visiting Israeli archeological excavations just outside the wall of the south-eastern corner of the Old City of Jerusalem (the “City of David” area, beneath the dome of Al-Aqsa Mosque), on 22 February 2010:

This began as a blog about the United Nations.   Then it changed…

The first items were posted on UN Truth on UN Day [24 October] in 2006. when Marian Houk was still in Geneva. UN Day commemorates the UN Charter’s entry into force on 24 October 1945. The UN Charter was signed a few months earlier, on 26 June 1945, in San Francisco, in the wake of the Second World War.

This was of course not an official UN website, and all opinions are purely personal.

We started out hoping to shed some light on the workings of the United Nations and on issues that are discussed at the United Nations that are of particular concern to us. Human rights is one of those issues. Journalism – and freedom of expression, opinion, and movement – is another.

UN-Truth is hosted on servers that are set up and maintained by Zero-Analog in Seattle.

In the photo below, taken at a roundtable discussion in Jerusalem in July 2004, Marian Houk is the woman wearing the sort-of-orange-colored eyeglasses. Photo courtesy of PASSIA:

In the photos below, taken in the UN Radio Studios in the Palais des Nations in Geneva, Marian Houk is shown conducting a UN Radio interview. Photos by Jean-Marc Ferre. 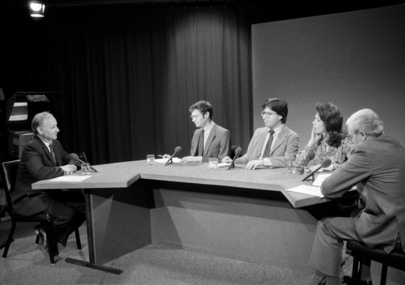 And, click on the following link for a picture included in Liberian journalist Gabriel William’s book, Liberia: the heart of darkness: on this page.