It appears that an unprecedented humanitarian operation for Gaza will now follow three weeks of unprecedented Israeli military attacks that, it has now been determined, have met and surpassed their goals.

Israel is about to open, with a certain amount of fanfare, a “forward emergency treatment center” at the Erez border crossing to receive, treat, and perhaps refer to Israeli hospitals, some of the nearly 6,000 Palestinians in Gaza who have been wounded by the IDF Operation Cast Iron over the past three weeks, and probably also some critically ill patients who may not have been wounded but who need advanced treatment not currently available in Israel.

A note of caution: the IDF says Operation Cast Iron is continuing, despite the unilateral cease-fire that began at 2 am today.

UPDATE: Word has just been received of a Hamas decision to have its own one-week cease-fire (can this be called “unilateral”, too?) to allow for the withdrawal of IDF troops.

As we also mentioned elsewhere on this blog, As’ad AbuKhakil has posted this very interesting scoop on his Angry Arab blogspot, here, with an appeal for further information: “Ahdaf Souif sent me this from (Egyptian) Rafah (I cite with her permission): ‘Outside the general Hospital in Egyptian Rafah a city of tents has sprung up. I counted 200. But the soldiers there told me they have many more and can set them up immediately. They said the beds and furnishings for all the camps are ready. I was also told that other camps are being set up, in el-Arish and other locations. I was told these camps were being set up for “the Palestinian refugees.” Where will they come from? From Gaza. When? When they open the border. Officers then arrived and insisted that we leave immediately. Any information we wanted we could get from the headquarters of the Second Army in Ismailia. A soldier added that some TV stations had been here already – but they were with the Army’.” 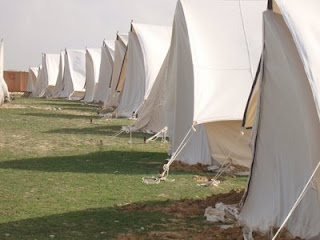 Perhaps we will know more after a summit meeting that Egypt is hosting in Sharm as-Sheikh today. AFP reported that “Germany, Britain, France, Italy, Spain, Turkey and Jordan will be represented at the meeting in the Red Sea resort of Sharm el-Sheikh, an Egyptian government official, who requested anonymity, told AFP. In Paris, the office of French President Nicolas Sarkozy said he will co-chair the summit along with his Egyptian counterpart Hosni Mubarak, who has sought to broker an end to the fighting under a truce plan … The respective offices of German Chancellor Angela Merkel and Spanish Prime Minister Jose Luis Rodriguez Zapatero, whose country has played a mediation role in the conflict, said they would attend. Merkel, Sarkozy and Zapatero all said they will travel to Israel after the meeting. In London, Downing Street declined to confirm that British Prime Minister Gordon Brown would be among the participants in Sharm el-Sheikh. But the Italian government said Prime Minister Silvio Berlusconi will attend the summit before heading to Israel for talks with Israeli authorities. [UNSG] Ban Ki-moon, on a tour of the region to secure a Gaza ceasefire, also confirmed his participation while in Beirut … The Egyptian official said Jordan would be represented by King Abdullah II. A Turkish government official said President Abdullah Gul will take part, although the invitation was extended to Prime Minister Recep Tayyip Erdogan, who is unable to go due a previously scheduled visit to Brussels.
Diplomatic sources said earlier that Palestinian president Mahmud Abbas was invited but would not attend as he held talks with Mubarak in Cairo late Saturday[?? – there must be other considerations]. After the meeting, Mubarak is to travel to Kuwait on Monday for an Arab summit on the Gaza crisis that is expected to highlight divisions between participating states over how to end the conflict. Mubarak last week presented a three-point proposal to end Israel’s offensive against the Hamas-ruled Gaza Strip. The initiative called for an immediate ceasefire and allowing humanitarian aid into the impoverished enclave as well as ending arms smuggling between Egypt and Gaza. Mubarak said on Saturday that Egypt “will continue its efforts as soon as there is a ceasefire to restore the truce and lift the blockade” imposed by Israel on crossing points into Gaza”. This report can be read in full here.

UPDATE: WE ARE NOW INFORMED (by a press release announcing a Peace Now demonstration) that these guys — or at least some of them — are going to be in Jerusalem tonight already: “Prime Minister Olmert will be hosting the heads of European countries for dinner, following their peace summit in Sharam [n.b. this is the Israeli spelling for Sharm as-Sheikh] earlier in the day. Peace Now activists will be protesting opposite the Prime Minister’s residence from 19:00hrs – calling upon the Israeli government and the heads of the European states to ensure that a political solution is found to the conflict with Hamas, in addition demanding that an immediate return to negotiations with the Palestinians is implemented”.

Meanwhile, the State of Israel (primarily, it seems, in this case, this is the Ministry of Defense) is due to respond to questions put by Israel’s Supreme Court after petitions were filed by Israeli human rights organizations about the humanitarian conditions in Gaza. The Supreme Court was dissatisfied with the State’s earlier response, which is summarized here in English thanks to GISHA, which has been in the forefront of the efforts through the Court:
“The following is a summary of the State’s response:
In general – the state has stated that it’s doing all that can be done under the circumstances (military zone and etc.)
* The state argues that there were preliminary preparations, months before the military operation, to enable humanitarian aid during the operation … [However] this is not consistent with the actual fact that Israel has practically drained Gaza of industrial fuel and other types of fuel, spare parts and goods in the 2 months before the operation. Those 2 months were the peak of a 14-month-long policy of strict restrictions and closure of the crossings to Gaza Strip.
* The state claimed that it has created coordination mechanisms with the purpose of providing ad hoc responses to humanitarian matters. Some of those mechanisms are in the form of war rooms (or operation rooms) specifically addressing humanitarian issues such as infrastructure and evacuation of wounded. In reality, as we know, the humanitarian needs of 1.5 million people are far from being answered. 250,000 people have been without electricity for more than 21 days, since the beginning of the operation on December 27th. More than 500,000 people are without access to running water, most of them for more than 2 weeks. The ‘humanitarian war rooms’ are not providing sufficient answer to the security coordination problem which is a major obstacle since Palestinian technicians are afraid to work without security coordination (and they should know – after the IDF has fired towards at least 2 teams of technicians during their work, this even after security clearance was granted).
* The state mentioned with pride that the IDF is engaged in an ongoing learning process during the operation and one key piece of evidence is the ‘humanitarian corridor’. As we know, the humanitarian corridor does not include transfer of fuel, water or electricity. The technicians’ teams don’t have enough time during the ‘corridor’ to complete the required repairs and the fuel tracks don’t have enough time to transfer the fuel throughout the Strip from the crossing to the power plant.
· The state points out that the Palestinians are the ones to blame in regard to the lack of repairs and the delay of evacuation of wounded since they refuse to do it without security coordination and UN escort and those requirements slow down the process. As I’ve mentioned – they have every right to insist on those demands but more than that – Israel , as the one with the effective control on the area, has an obligation, under humanitarian law, to ensure that all the humanitarian need of the civilians in Gaza will be answered, no matter what it requires from it or under which circumstances
· The state informed the court on January 13th that it allowed a small quantity of spare parts for the electricity grid to enter Gaza on January 9. But the state neglected to mention that on the very same day – January 13th – it bombed the warehouse where those parts were stored, destroying most of them. There is a massive problem of lack of spare parts that are essential to the electricity system as well as for the water and sewage system. Most of those spare parts are just sitting and waiting at Karni crossing for the last 4 months since Israel has refused to allow it to go inside the Strip. Of course, it is now even more crucial than before that they will enter the Strip”.