March 30 protests [in East Jerusalem, the West Bank, Gaza, as well as inside Israel and just outside its northern and eastern perimeters] marked the start of Year Two of Popular Protests against … continued Israeli occupation.

It was, this year, a combination of the Global March to Jerusalem + Land Day.

The day started out slowly — but with prior Israeli preparation that had some of the trappings of the pre-Mavi Marmara “naval incident” during which an Israeli naval boarding on the high seas in the eastern Mediterranean resulted in the deaths of nine Turkish men, including a Turkish-American high school students.

There were. also reminiscent of the pre-Mavi Marmara build-up, even prior alerts about Iranian involvement in sending and training “terrorists” to “infiltrate” the Israeli “borders” from neighboring countries…

As the day went on, it became clear that (1) the Ramallah-based Palestinian Authority in the West Bank was ineptly and covertly trying to keep a lid on things there while allowing a low-level flame to burn; that (2) Hamas was making attempts at preventing protesters from actually succeeding in entering the Erez Terminal between Israel and northern Gaza [DEBKAfile reported, sensationally as always, that Hamas took on Islamic Jihad “snipers” to do so]; that (3) Lebanese authorities kept their rumored word not to allow protests south of the Litani River; that (4) the current Syrian Government had no interest in seeing a repeat of last year’s Nakba + Naksa Day fatalities across the UN-monitored demilitarized zone on the Golan Heights; and that government was able to allow some 15,000 Palestinian refugees and their supporters to meet and gather within a few kilometers of the border with Israel without any cross-border clashes. UN Blue Helmet truce monitors kept watch with binoculars all day where last year over 20 people died as they defined warning shots and ran through minefields — this year, the UN observers saw, maybe, a couple of butterflies.

A report from CNN’s Ben Wedeman on a rally at Beaufort Castle in Lebanon can be viewed here.

In preparation for the demonstrations, the IDF ordered a complete closure of the West Bank until midnight.

Around Jerusalem itself, the activities [and clashes] were in the Old City of East Jerusalem [Damascus Gate in particular], at Qalandia Checkpoint between Jerusalem and Ramallah, and at the main Israeli checkpoint into Bethlehem.

The New York Times story by Ethan Bronner, published here, used this photo of horse-mounted policemen ploughing through demonstrators in front of Damascus Gate to the Old City of East Jerusalem: 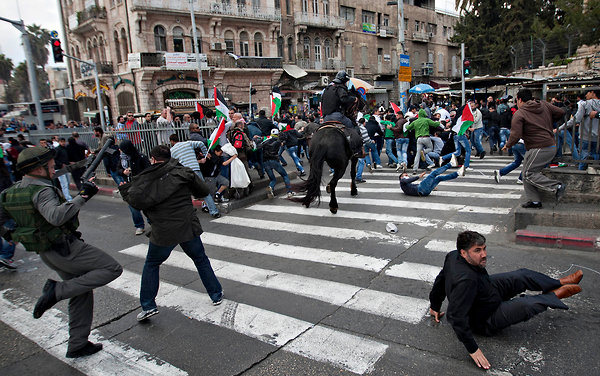 Bronner noted in his NYTimes piece that “While the events on Friday were less violent and smaller than many anticipated, the tenor of the discourse offered Israel little comfort”.

Another photo from the East Jerusalem protests shows a visibly-outnumbered protester apparently being subjected to close-range pepper spraying to his temple, quite near his eye:

Photo Tweeted by @DidiRemez and also published by Ma’an News Agency, in an album posted here.

There were many injuries – including a young man hit in the head by a tear gas cannister at the Bethlehem checkpoint; an 8-year-old boy hit in the face by a tear gas cannister at the weekly protest in Nabi Saleh; one young man, 20-year-old Mahmoud Zaqout, was shot in the chest and killed on the Gaza side of Erez checkpoint —  his death reportedly brings to 5o the number of Palestinians who have died during Land Day protests since the original event it commemorates, in which six died, in 1976…

At Qalandiya, where there are thousands of civilians living in homes in close proximity to the checkpoint and to the action, tires were burned, the IDF moved 100 meters or so out of the checkpoint fanning north, west, and east, and there were enormous quantities of tear gas used [which fills the rooms of the neighboring houses and shops], as well as rubber bullets, skunk spray, and something used during the boarding of the Mavi Marmara [a projectile which emits smoke when fired and which causes painful welts on the skin].

There was also a problem at Qalandiya during which Mubadara Leader Mustafa Barghouthi was injured — apparently in the midst of a tear gas volley — by fighting about tactics and timing, involving his supporters and those of other Palestinian factions.  Barghouthi, an elected representative to the dormant Palestinian Legislative Council who has run as an independent candidate for President of the PA, also runs the Palestinian Medical Relief Committee whose ambulances were in constant service during the day.

On Friday, @jstthtgood sent these Tweets: “Mustafa Barghouti Attacked in #Qalandia while in an Ambulance because he started the ‘March to Jerusalem’ without other factions present” … and “They were suppose to wait till after prayers, and also for other ‘leaders’ to arrive” as well as “Barghouti started early and alone”.

UPDATE: Ma’an News Agency is reporting on Saturday here that “Palestinian Authority investigators have visited the lawmaker in a Ramallah hospital to check up on the circumstances surrounding the injury, a police report said”. This report also notes that “The police investigation is centered on reports that Barghouti was attacked by political adversaries following a dispute about how to carry out the demonstration, which was attended by several factions”.

The NYTimes piece by Bronner reported earlier that “At the Qalandiya checkpoint between the West Bank and Jerusalem, masked youths threw stones at Israeli troops and set tires on fire. The troops responded with rubber bullets and tear gas. Mustafa Barghouti, a doctor and Palestinian politician, said one of the tear-gas canisters hit him, sending him to the hospital. ‘I was hit with a tear-gas bomb on the side of my head and my back’, Dr. Barghouti said in a telephone interview from his hospital bed. ‘My scalp is injured, my right ear has problems, and they are checking to see if I have any spinal injury’.  The Israeli military spokesman’s office, in a set of Twitter messages and later over the telephone, said Dr. Barghouti had not been hit by an Israeli canister but had been attacked by other Palestinians.  A few Palestinian witnesses offered a similar account.  The Palestinian minister of social welfare, Majida al-Masri, was treated after collapsing from tear-gas inhalation“.

Photo of the action at the Bethlehem 300 checkpoint via @GazaYBO [Gaza Youth Breaks Out] on Twitter:

UPDATE: A collection of wonderfully graphic photos of the day’s activities was posted later by the Denver Post here.

Bethlehem activist Mazin Qumsiyeh, who has an email list of some 50,000 names, sent out an email summary at the end of the day which concluded with the words: “Action is the best antidote to despair”.