Day 7 opened with reports from international journalists in Gaza saying it had been an unusually quiet night — but the IDF reporting some 180 overnight strikes.  The rocket fire from Gaza resumed just before the start of the business day.

UNSG Ban Ki Moon was in Egypt, and had already made a press statement from Cairo saying it would be a bad idea for Israeli to move to a ground operation inside Gaza, before a delegation of Arab Foreign Ministers headed by Arab League Secretary-General Nabil Araby headed to Rafah to go to Gaza on another solidarity visit.

European Foreign Ministers and Quartet Envoy were doing the rounds in the Tel Aviv-Jerusalem-Ramallah circuit.

A surprise announcement this morning said that U.S. Secretary of State Hillary Clinton was diverted to head to the region from Thailand today, and should arrive in Israel by the afternoon or evening to strengthen efforts to conclude a cease-fire.

Then, by  mid-day the  cease-fire [vs escalation by ground invasion] roller-coaster ride picked up weight + speed.  Via Twitter:

RAGreeneCNN ?@RAGreeneCNN – Israel to HOLD OFF on ground offensive “for a limited time for a diplomatic solution,” Israel govt official tells CNN’s @camanpour

Then just after 13:hh, a Tweet from the BBC’s Lyse Doucet [@bbclysedoucet] – Mohammed Deif Head of Hamas Military wing will give “important announcement” on #Hamas TV shortly #Gaza #Israelah

But, the BBC’s Paul Danahar then Tweeted: @pdanahar – Head of the Hamas military wing Mohamed Deif in #Gaza says nothing about ceasefire he just encouraging people to keep fighting

Just after 14:00 air raid sirens sounded in Jerusalem. There is no Iron-Dome battery in Jerusalem. An explosion was heard. The missiles [reportedly, two] apparently hit an area of open ground. The AlQassam Brigades said they were M-75 missiles with a 75-km range. It was later reported [via Bethlehem-based Ma’an News Agency] that the missiles hit in a Palestinian area near Surif, Beit Ummar, in the southern West Bank.

Not long afterwards, the IDF reported they made a direct hit on a motorcycle, killing the riders who the IDF identified as the crew which fired the missiles towards Jerusalem.

After that, leaflets were dropped in certain areas of Gaza, instructing residents to leave their homes and move towards the center of Gaza City.  That should make it very crowded…

This could be an indication of an imminent ground invasion. Or, it could be a Psy-Ops operation intended to push truce negotiations forward. 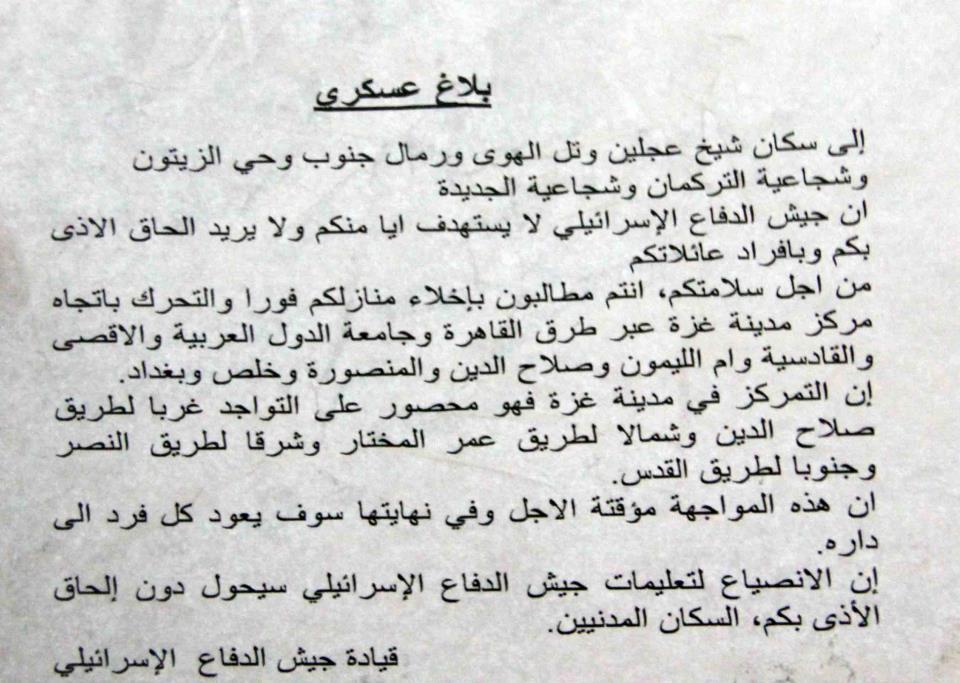 A translation, posted here, offered by Yousef Munayyer of the Palestine Center says:

The IDF is not targeting any of you and does not want to harm you or your family. For your safety, we demand you to evacuate your homes immediately and move toward the center of the city via one of the following paths: Al Qahira, Jami’at Al Dool Al Rabya, Al-Aqsa, Alqadsyah, Om El Laymon, Salah Eldeen, Almansoorah, Khalas and Baghdad. The designated area in the city of Gaza is limited to west of Salah-a-deen Road, north of Omar Al Mokhtar Road, east of AlNassir Road and south of al-Quds road. This is a temporary confrontation and in the end every person will return to his home . Obeying these IDF instructions will keep civilian residents like you from harm’s way

The leadership of the Israeli Defense Force

An alternate translation can be found here.

His post offers a larger map, published here, showing exactly the area defined. He explains: “The red area represents the neighborhoods which must evacuate immediately into the area in the blue square”.

People in the center of Gaza are advised to go be squeezed together inside an even tighter and smaller area — for how long?

Tens of thousands, possibly hundreds of thousands of terrified people, crowded overnight into a central area — without shelter, sanitation, food and water?

The Arab League delegation of Foreign Ministers did go in and out of Gaza today, rolling in impressive SUVs on some surprisingly clear streets with security guards standing in the doors of the cars as the convoy whizzed passed.  Ismail Haniyeh gave the group a brief lecture, then they went to Shifa Hospital in Gaza City, where Turkey’s Foreign Minister Ahmet Davutoglu showed some emotion.

AlQassam Brigades said the Turkish FM was “sharing the #Palestinian people pain and sorrow”, and Tweeted a photo of one of the moments: @AlqassamBrigade – pic.twitter.com/JHMh4PEI

Then, two journalists working for Al-Aqsa TV [Mahmoud Al-Komi and Husam Salama ] were killed in a targetted strike moments after the Arab League delegation’s convoy left, burning to death in their struck car, which was clearly marked “PRESS”.  A third journalist was targetted a short while later, elsewhere in Gaza.   Ma’an News Agency later reported here that Palestinian press freedom group Mada “condemned the strike as a ‘heinous crime … (and) a flagrant breach of the international conventions that protect journalists’.”, and demanded an international investigation.

Six men accused of being “collaborators” — identifying targets for Israeli strikes — were pulled out of a van that pulled up on a downtown street and shot in front of surprised onlookers.  Despite the ongoing air attacks, the crowd grew when the executioners said that the men were collaborators.  One report later said Hamas was investigating.  Reuters reported that “Hamas executed six Palestinians accused of spying for Israel, who a security source quoted by Hamas Aqsa radio said had been ‘caught red-handed’ with ‘filming equipment to take footage of positions’.  The radio said they had been shot. Militants on a motorcycle dragged the body of one of the men through the streets”. This report is published here

The Gaza Mall, which also houses the offices of AFP, was targeted later.

The only explanation is this Tweet put out by the IDF: @IDFSpokesperson – Targeted in #Gaza over evening: bank used to finance Hamas operatives, command & control center, Hamas hideout & operatives’ meeting place

According to a later report on Reuters, here, “Israel’s military said it had been targeting a Hamas intelligence centre in the tower”.

The Committee to Protect Journalists [CPJ] issued a statement saying that Israel “must immediately halt airstrikes targeting news offices”, apparently referring to the strikes over the past several days.  The CPJ statement is published here.

CPJ later issued a second statement, which focused a bit more on the targetted killing of the three Palestinian journalists working for Al-Aqsa TV + Radio.

“We’re alarmed by the mounting toll on journalists in Gaza,” said CPJ Middle East and North Africa Program Coordinator Sherif Mansour. “Israeli airstrikes continue to put journalists in harm’s way. This reflects the risks journalists face while reporting on conflict, especially in such a densely populated area.” A third journalist was killed when his car was hit by a missile this evening, The Associated Press reported citing a Gaza official. Initial local news reports identified the journalist as Mohamed Abu Aisha, director of the private Al-Quds Educational Radio. The reports said his vehicle was hit while he was driving in the Deir al-Balah neighborhood, but did not say whether Abu Aisha was reporting at the time. CPJ continues to investigate the circumstances of his death. This is posted here

This morning, it was reported that 111 Palestinians had been killed since the start of Pillars of Clouds.  By 16:30, the death toll in Gaza had increased to 121… and counting. Just after 22:00, Arwa Damon of CNN posted this Tweet:

The Haaretz Live Blog reported here at 10:40 P.M. “IDF: Since beginning of Operation Pillar of Defense, 1,500 targets were hit in the Gaza Strip, 133 on Tuesday. Iron Dome intercepted 389 rockets since operations’ onset, including 51 on Tuesday”…