Five months ago, former UN Secretary-General Annan [who is retired, after two terms in office and living in Geneva] accepted the job of joint UN and Arab League envoy to end to bloodshed in Syria.

Today, Annan told journalists at a news conference in the Palais des Nations in Geneva that he was giving up — but he’s apparently not walking out and leaving right away, he said….

He’ll be leaving at the end of the month, on 31 August.

Coincidentally, France — which is the most gung-ho in wanting intervention in Syria — has assumed the rotating presidency of the UN Security Council for the month, and will preside over all deliberations durin the entire of August.

Does that suggest that Annan might be persuaded, if circumstances change, to change his mind?

It seems not. Here is what he replied when asked by a journalist, “Is this a resignation?”: “Yes, I am not going to continue”, Annan said.

But, there’s something about this that gives the impression that Annan didn’t jump on his own, and that he was pushed.

Just look at the expressions on these two faces — both of these men, including spokesperson Ahmad Fawzi on the left, show unease, if not chagrin — not regret or firm determination. They look perturbed. 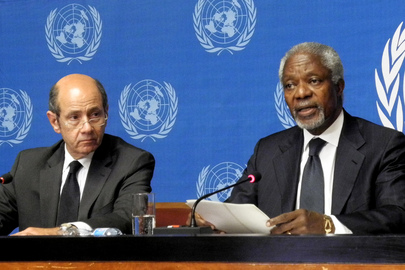 This photo is posted by the UN here.

Ian Black wrote in The Guardian here that Annan made “a sometimes bitter and frustrated statement” in the Geneva press conference. Black also wrote that “Sluggish and ineffective diplomacy has been outpaced by a fast-moving and increasingly dangerous situation” on the ground in Syria, particularly in Aleppo.

It may be that Annan was perturbed by a reference, reportedly since eliminated, that he should better focus his efforts — a reference contained in a Saudi-backed draft text on Syria due to be presented to the UN General Assembly on Friday.

But, it is interesting that UNSG BAN Ki-Moon so readily accepted Annan’s resignation [ok, BAN did say “with deep regret”, but that’s the least he could do]. And, instead of diplomatic reflection, or saying that the entire business is under re-evaluation, there was an immediate flurry of speculation about who might be Annan’s successor…

Further evidence of the push comes from a statement issued later by the U.S. State Department, in the name of Secretary of State Hillary Clinton — the words are classic, and the standard way to indicate that a resignation was desired if not required, and then accepted with considerable satisfaction:

“Earlier today, I spoke with Kofi Annan and thanked him on behalf of the United States for his service as the UN-Arab League Joint Special Envoy for Syria. Five months ago, he took on the heavy task of trying to bring an end to the killing of civilians in Syria and to forge a path toward a peaceful political transition and an inclusive, representative post-Assad Syria. He worked tirelessly to try to build consensus in the international community, end the bloodshed, and usher in a government that would meet the legitimate aspirations of the Syrian people. Unfortunately, the Security Council was blocked from giving him key tools to advance his efforts.  I wish Kofi Annan well in his future endeavors. To the Syrian people: the United States continues to stand with you and we remain committed to an effective and swift political transition as envisioned under the Annan framework“.

Russia and China, the two UN Security Council members who had opposed regime change or calls for Bashar al-Assad to step down, to be replaced by some new government, seemed to be feel far more regret at the news of Annan’s move. Syria also reportedly expressed regret.

UPDATE: A report by Reuters at midday Friday supports the involuntary departure thesis: “Moscow said it regretted his departure. ‘He’s an honest broker, but there are those who want to take him out of the game to untie hands for the use of force. It’s already clear’, Russia’s Deputy Foreign Minister Gennady Gatilov wrote in his Twitter microblog”. This report is published here.

Also on Friday, the UK Foreign and Commonwealth Office (Foreign Ministry) Tweeted: @foreignoffice – .@williamjhague: “UNSC have agreed what should happen – a transitional govt should be formed in #Syria & Annan’s plan should be followed”.

Annan said at a press conference in Geneva on Thursday afternoon that: “The increasing militarization on the ground and the clear lack of unity in the Security Council, have fundamentally changed the circumstances for the effective exercise of my role. Yet the bloodshed continues, most of all because of the Syrian government’s intransigence, and continuing refusal to implement the six-point plan, and also because of the escalating military campaign of the opposition – all of which is compounded by the disunity of the international community. At a time when we need – when the Syrian people desperately need action – there continues to be finger-pointing and name-calling in the Security Council“.

Annan actually appears to be most upset that the UN Security Council did not endorse a communique agreed in Geneva on June 30: “The Geneva Communiqué, endorsed by the Action Group for Syria on 30 June, provided an international agreement on a framework for a political transition. This should have been automatically endorsed by the Security Council and something the international community should have built on. Without serious, purposeful and united international pressure, including from the powers of the region, it is impossible for me, or anyone, to compel the Syrian government in the first place, and also the opposition, to take the steps necessary to begin a political process. You have to understand: as an Envoy, I can’t want peace more than the protagonists, more than the Security Council or the international community for that matter”.

He also said, at his Geneva news conference, that: “We need a well-organized, balanced and fair political settlement to resolve this issue. There is no military solution”.

A Six-Point Plan [called the Annan Plan] was adopted by the UN Security Council in March. As described by the Voice of America [VOA] on 11 April, here, it “called for Syria’s government to withdraw its forces from major urban areas by April 10 and stop combat operations by Thursday [12 April]”. VOA added that the plan also “called for opposition forces to stop fighting”. Here’s VOA’s quick summary of the plan:
– A Syrian-led political process to address the aspirations and concerns of the Syrian people.
– A UN-supervised end to armed violence by all parties in Syria.
– Timely humanitarian assistance in all areas affected by fighting.
– Increasing the pace and scale of release of arbitrarily detained people.
– Ensuring freedom of movement for journalists.
– Respecting freedom of association and the right to demonstrate peacefully”.

There was a slow deployment of UN military observers to Syria, beginning with 30 of them. But weeks ago, shortly after the observer mission reached its peak strength of 300 men, they were effectively confined to their hotels because of the violent combat on the ground.

The Annan mission, with its military observers, replaced a quickly-overwhelmed Arab League mission, and Annan has been a Joint Envoy acting on behalf of the Arab League as well as the UN.

The full text of Annan’s remarks to the press in Geneva is posted here.

In a separate piece, entitled “My departing advice“, which is published by the Financial Times here and which was probably written by Ahmad Fawzi, to the left in the photo above, Annan says: “there is also a political impasse. A mass movement, born in the demand for civil and political rights and the empowerment of voices for change, emerged in Syria after March 2011. But, for all the extraordinary courage that it took for the protesters to march each day in the face of escalating violence by the government, this did not become a movement that bridged Syria’s communal divisions. Opportunities to overcome this were then lost in increasing violence, Military means alone will not end the crisis. Similarly, a political agenda that is neither inclusive nor comprehensive will fail”.

This FT piece, signed by Annan, stated that “It is clear that President Bashar al-Assad must leave office”.

But, the same FT piece signed by Annan also noted that “the future of Syria rises and falls on more than the fate of just one man”.

Since a bombing in Damascus killed several significant Syrian officials two weeks ago, Bashar has not been seen. There has been speculation that he and his family have taken refuge in the Syrian port city of Latakia.

Three Russian ships with marines on board are due to dock soon at Russian naval facilities in the Syrian port city of Tartus today, and stay for several days, according to Reuters. [AFP, see below, reports that “Tartus is the Russian navy’s only permanent warm water port outside the former Soviet Union”.] The Reuters report, posted here, says the three Russian ships with marines onboard would be joined by three other Russian naval vessels already nearby.

The International Crisis Group [ICG] published a report Wednesday on Syria’s Mutating Conflict, posted here, which says that “there are  more than enough ominous trends, none more alarming than these: a regime seemingly morphing into a formidable militia engaged in a desperate fight for survival; an Alawite community increasingly embattled and persuaded its fate hinges entirely on the regime’s; and an opposition that, despite sometimes heroic efforts to contain them, is threatened by its own forms of radicalisation. Together, this could portend a prolonged, ever more polarised, destructive civil war”.

The ICG report said pointedly that this “has left the joint UN/Arab League peacemaking mission, led by Kofi Annan and perfunctorily endorsed by all concerned, stranded on the diplomatic and military battlefield. Those who have supported it do so almost entirely for the wrong reasons and in ways that ultimately undermined its ability to function effectively. Syrian and foreign parties backed Annan only to the extent that his efforts could promote their respective goals (defeating the regime for some, preserving it for others), thereby making his attempts to find a middle ground akin to squaring a circle. By its mere existence, the mission, however ineffective, gave key players useful ancillary benefits: the West a convenient justification to avoid confronting the prospect of military intervention for which there is no appetite; Russia a way to conceal backing for the regime under support for diplomacy. As survival of the process has appeared an end in itself, a means of evading both serious compromise and risky intervention, the mission increasingly has become irrelevant, both criticised and ignored by the opposition on the ground”.

Kofi Annan may be getting out just in time — if it had been his decision to leave [which does not appear to be the case]. In any case, it might have been better if he had walked off the job today, instead of waiting until the end of the month.

Agence France Presse [AFP] wrote an un-datelined dispatch published Friday here saying that “Reports on Wednesday citing unnamed US officials said President Barack Obama had signed a document allowing covert support to the [Syrian] rebels and which would authorize clandestine action by the Central Intelligence Agency. That would permit Washington to offer all kinds of assistance, including organizing contact with various rebel groups, providing communications and intelligence assets and assessments. And, while Washington may not be directly providing arms, some of its allies are”…

The same AFP story also noted that “Some $25 million in non-lethal US support such as communications has already been earmarked for the Syrian opposition. And on Thursday, Obama approved an extra $12 million in humanitarian aid for Syrians to mitigate what he said were Assad’s ‘horrific atrocities’.”

The UK announced later Friday that it would follow suit, and would be increasing “nonlethal aid” to the Syrian rebals.