Israeli’s Operation Defensive Pillar a/k/a Operation Pillar of Clouds was the source of a number of prize-winning news photos this year.

The World Press Photo of the Year, [Spot News, 1st prize singles, 2013] announced on 15 February is “Gaza Burial – 20 November 2012”, by Swedish photographer Paul Hansen who has worked for the daily newspaper Dagens Nyheter since 2000. One of the judges said that he’d looked at “a lot of powerful material” from Syria and Gaza among this year’s entries.

The winning photo was published by Le Nouvel Observateur here. 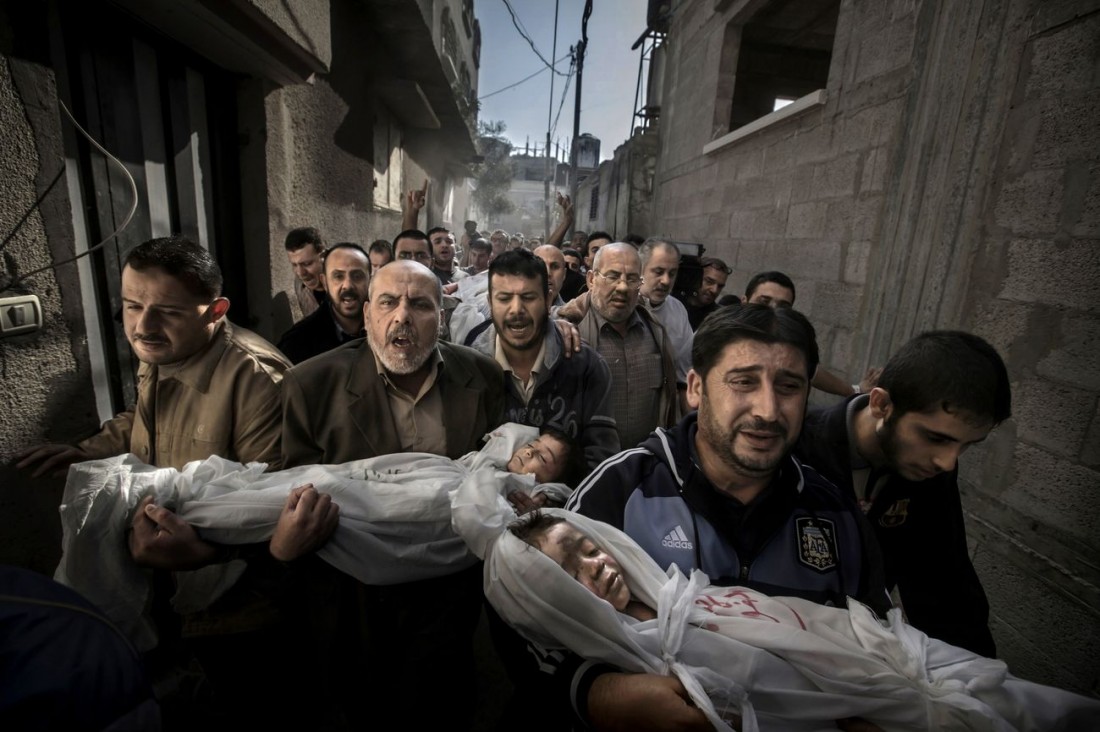 The light and color of Paul Hansen’s winning photo is extraordinary — it almost looks like a theater or stage set.

The NYTimes wrote here that the image draws some of its power “from its striking — almost stylized — lighting and tones. Mr. Hansen, 48, said the unusual look resulted when light bounced off the walls of the alley for just a few moments”. It added that “Santiago Lyon, vice president and director of photography for The Associated Press, was chairman of the jury … Mr. Lyon said the jury carefully examines the winning images for post processing. He said they decided Mr. Hansen’s photo was ‘within the acceptable industry parameters’. He added: “Everybody has different standards about these sorts of things, but as a group we felt that it was O.K.”

Gaza Burial
20 November 2012
Gaza City, Palestinian Territories
Photo caption: “Two-year-old Suhaib Hijazi and  older brother Muhammad [three or four years old] were killed, along with their father Fouad, when their house was destroyed in an Israeli missile strike. Their mother was put in intensive care. Fouad’s brothers carry the children to the mosque for the burial ceremony and his body is carried behind on a stretcher“.

UPDATE: Yousef Munayyer of The Palestine Center and The Jerusalem Fund wrote here that, based on a Human Rights Watch account,  “On November 19 at around 7:30 p.m., a single munition struck the house of the Hijazi family in Block 8 of the Jabalya refugee camp. The small, two-story cinderblock house was mostly demolished while 10 family members were inside. The strike killed Fouad Hijazi, a 46-year-old janitor at the Hamad secondary school, along with two of his children, Mohamed, 4, and Sohaib, 2. His wife, Amna, was wounded, as were three of their sons and a daughter”.

Munayyer indicated his information is based on a HRW account posted here, which said this was the result of an aerial bomb strike, one of 18 Apparently Unlawful Airstrikes During the November 2012 Fighting [with no apparent military objective>].

Munayyer picks up HRW’s material that adds this: “The surrounding buildings in the densely packed area were only lightly damaged, except that there was slightly more substantial damage to one side of one adjacent house. The damage suggests that an Israeli aircraft dropped a bomb at the site. Human Rights Watch found no munition remnants at the site.  A neighbor who lives across a very narrow street – too small for a car – from the Hijazi home said he heard no shooting of rockets from the area at the time or at other times during the 8-day conflict. There were no other explosions in the area that night, he said. He and other local residents said they did not know or understand why the Hijazi family home had been hit, saying that the family had no connection to any of Gaza’s armed groups. One of Fouad’s other sons had been killed by an Israeli strike about five years earlier, one neighbor said, but he was a civilian who was killed accidentally.  The IDF did not make any announcements about specific strikes in Jabalya at the time. The Israeli Intelligence and Terrorism Information Center stated that the three victims were ‘non-involved’ civilians”.

The NYTimes noted that “World Press Photo is a 56-year-old nonprofit foundation with headquarters in Amsterdam, where the announcement of this year’s winners was made on Friday morning”.

On 9 February, Paul Hansen won First Place as Newspaper Photographer of the Year [one of two portfolio honors awarded each year by POYi] for a photo he took in Afghanistan for Dagens Nyheter. This winning photo is posted here.