After nearly a year of waiting, following the November 2012 exhumation (for testing) of the remains of the late Palestinian leader Yasser Arafat from his mausoleum in the Ramallah Muqata’a, Al-Jazeera reported today that a Swiss forensics laboratory in Lausanne found very very high levels of Polonium 210 in Arafat’s bones, in his burial shroud, and in the soil in which his body was buried.

The Swiss report says “tests on specimens taken from bone fragments + tissue scraped from Arafat’s decayed corpse + shroud  “moderately support the proposition that [Arafat’s] death was the consequence of poisoning with polonium-210”.   Al-Jazeera’s Clayton Swisher said that “on a scale of confidence of 1 to 6 [with 6 being strongly confident], scientists say the data supports poisoning at level 5″…

The test results come almost exactly nine years after Arafat’s death on 11 November 2004. His final illness began suddenly late on the night of 12-to-13 October. Arafat had been trapped by Israeli forces for the previous two years in two rooms in the Muqata’a Presidential Headquarters [a former British-Mandate era Government Quarters which served as an Israeli prison during the First Palestinian Intifada], confined in unhealthy circumstances in close quarters and under stress, sleeping under a table with the shell-damaged building crumbling around him.

Poisoning was suspected early on, at least by Arafat’s nephew Nasser al-Qidwa, who was Palestinian Ambassador to the UN in New York and subsequently Palestinian Foreign Minister. But polonium was not considered, in 2004. It was not until 2006 [and it was also in November] that defected Russian agent Alexander Litvinenko, living in London, was quickly diagnosed [with British Government help] with Polonium poisoning, during a reported-and-publicized three-week agony in a hospital before he died.

There’s also a Youtube, which Swisher called a “news package” [a full documentary will apparently air on Sunday]:

In Swisher’s Youtube “news package”, Arafat’s daughter Zahwa says she’s relieved, but wants “to know who killed him and the motive + ambitions behind it”…

The full 108-page Swiss report, in English, is also posted here on Al-Jazeera’s website, and:

No autopsy was performed at the time of Arafat’s death in Percy Military Hospital outside Paris, France in early November 2004. Just before his death, Suha had called Al-Jazeera Arabic’s Ramallah correspondent Walid al-Omary, and she was given on-air access to make emotional accusations that Palestinian leaders on their way to Arafat’s bedside wanted to kill him “and he’s still alive”.

Suha told Clayton Swisher in 2012 that at the time she was so upset she didn’t even think of an autopsy, it didn’t even occur to her.

(She later said that the decision was not in her hands, as the body was given, in Paris, to the “Palestinian Authority”… https://un-truth.com/egypt/yasser-arafats-mortal-remains-exhumed-samples-taken-for-forensic-testing-about-possible-poisoning-laid-back-to-rest-again )

The Swiss forensic team from the University Hospital Center in Lausanne reportedly handed over its report in Geneva to Suha Arafat’s lawyers and Palestinian .officials on Tuesday.

Tawfik Tirawi, named by Palestinian President Mahmoud Abbas to head a Committee of Inquiry into Arafat’s death, seems to have been in Geneva for this event, along with the Jordanian forensics expert Dr. Abdullah al-Bashir, a member of the Committee.  This was reported by the official Palestinian news agency WAFA, here. Dr. Al-Bashir was originally engaged earlier, in late 2010, by the Yasser Arafat Foundation headed by Arafat’s nephew Nasser al-Qidwa, who has long suspected that Arafat was poisoned. Dr. Al-Bashir initially contacted French hospital authorities, in writing in 2011, without much success.

END_OF_DOCUMENT_TOKEN_TO_BE_REPLACED

As the day dawned, there was red light on the Ramallah horizon, with the rest of the sky covered with a layer of grey clouds, as the late Palestinian leader Yasser Arafat’s mortal remains were exhumed and brought up for forensic testing by teams of Swiss, French and Russian experts.

“Red in the morning, a sailor’s warning”… a traditional warning of storms ahead.

UPDATE:  Despite the 3:00 pm report on BBC World News from the BBC correspondent in Ramallah Jon Donnison,  after the exhumation was finished, saying he personally believed it was quite unlikely that there will ever be any conclusive results from today’s forensic testing, the BBC right afterwards ran an interview with Scottish forensic investigator David Barkley who said that “it’s almost certain already”, from the results of the testing done in a Swiss lab, that Yasser Arafat was poisoned with polonium.

Barkley appeared in the Al Jazeera Investigates program “What Killed Arafat?”, aired at the beginning of July, which made necessary this exhumation and forensic testing of Arafat’s remains. In that program, Barkley said that Swiss lab testing showed unexpectedly high levels of polonium [of the type that can only be a by-product of a nuclear reactor] in the spots of blood, urine and sweat tested on Arafat’s clothing. When tested for comparison, he said, the areas of clothing around those spots showed only “background” levels of polonium [of the type found in nature].

Barkley told the BBC World TV news this afternoon that if the results of testing of samples taken in today’s forensic procedures match the results earlier found in his clothing, that “probably does prove” that Arafat was poisoned and murdered.

Robert Fisk wrote in the Independent here, that “it is much to al-Jazeera’s credit that they pushed to have his hat and urine stains from his pants examined in Switzerland. That’s when the polonium-210 was discovered”…

Media crews were kept behind Palestinian police barricades put up a couple of weeks ago, outside Ramallah Muqata’a, during Arafat exhumation + forensic taking of samples for testing [which will take months].  The exhumation + sampling was done out of the public view. 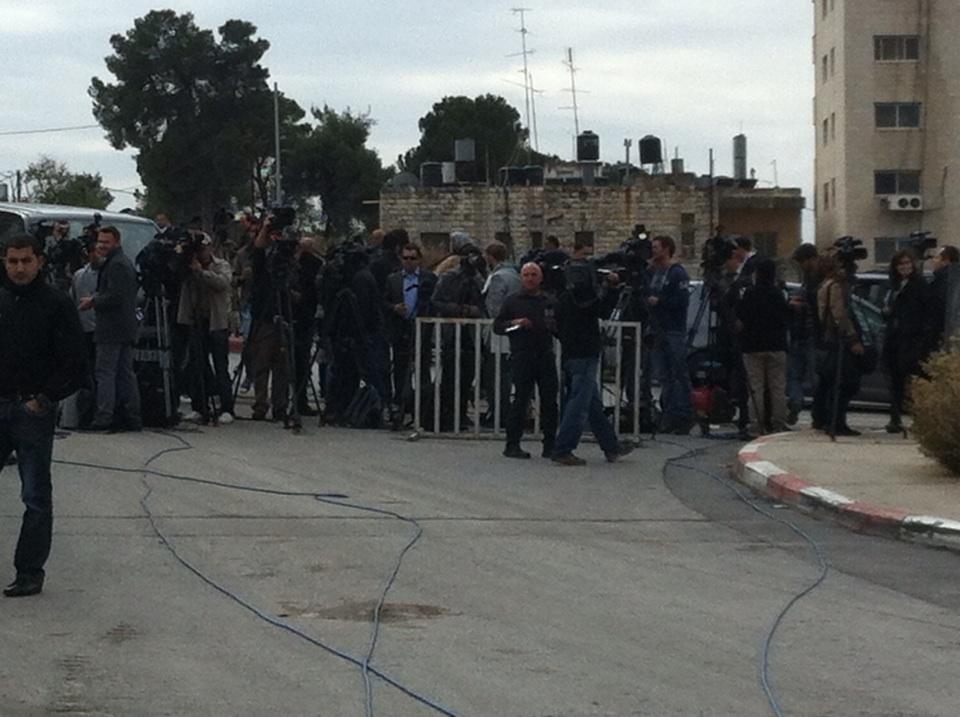 .
In a press conference held at 2:00 pm in the Ramallah Muqata’a,  Dr. Abdullah Bashir, head of the Jordanian Medical Association [who has been working on the Arafat case for several years on behalf of the Yasser Arafat Foundation, run by Arafat’s nephew Nasser al-Qidwa] said that the exhumation began at 5:00 am.

Tawfik Tirawi, head of the Palestinian inquiry that has already been underway for several years, told journalists at the press conference that the results of the tests can be expected after about four months.  “We want to arrive at the truth”, Tirawi said.  The Palestinian Authority Minister of Health, Dr. Hani Abdeen, said in response to a journalist’s question that “the state of the body was exactly as expected, in the case of somebody buried eight years already”.

Al-Jazeera reported here that a group of Palestinian officials were witnessing the procedure, but no family, and also not Suha Arafat’s lawyers. The Al-Jazeera report said that its journalists had been followed around Ramallah in recent days by Palestinian security forces.

Suha, however, told CNN’s Christiane Amanpour that she had watched the exhumation from her residence in Malta. It seems, but it is not completely clear, that a private TV feed may have been arranged for family members.

There is not a religious problem with exhumations, but some consider it disrespectful. The Palestinian arrangements for today’s exhumation + forensic testing — supervised by Tawfik Tirawi — emphasized respect for deceased, honor for national leader, Palestinian “sovereign” control of the procedure. Tirawi told journalists that only Palestinians would touch Arafat’s mortal remains.

Tirawi was at Arafat’s side during several years of Israeli siege of the Muqata’a, and who was once the head of Palestinian Preventive Security but now oversees the Palestinian Authority Police Academy [Al-Istiqlal University] in Jericho

Al-Jazeera reported that “On Monday night, workers with hand tools drilled through more than 4 metres of concrete over Arafat’s body.  Investigators have collected several samples on the way down to look at polonium levels”.