Worries that the cease-fire between Israel and Hamas was weak and wobbly increased on Friday when a large group of some 300 Palestinian men reportedly entered the no-go zone inside the perimeter fence east of Khan Younis.

One Palestinian was killed and 23 injured by Israeli troops.  Anwar Abdul Hadi Qudaih, 20, reportedly was hit in the head with a live bullet.

According to Maan News Agency, “A relative of the dead man, who was at the scene, told Reuters that Qudaih had been trying to place a Hamas flag on the fence”.   That was Friday.  Maan also reported that some 200 Palestinians had approached the perimeter fence the day before, Thursday. 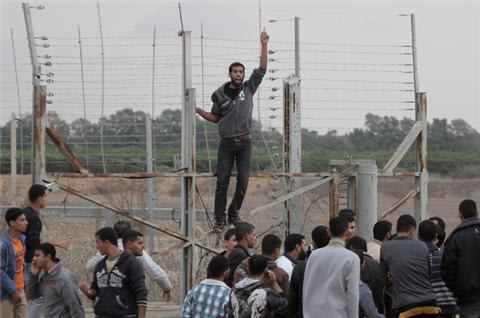 A photo said to be of Anwar Qudaih or Qdaih, standing on the Israeli-built fence, posted with the Al-Jazeera story published here.

Al-Jazeera reported that “Most of those approaching the fence were young men, the Associated Press news agency reported, but the crowds also included farmers hoping they could check on their farm lands in the buffer zone…Al Jazeera’s Nicole Johnston, reporting from Gaza City, said the farmers may have been confused about the current terms of access to the 300-metre wide buffer zone as Wednesday’s truce stipulates easing of travel restrictions.  They may have thought that they can now travel there, she said…”

Israel declared the  no-go zone in recent years, and from time to time increased it.   The “rules” could change at any time, and were never completely clear, except when the Israeli Army shot at people, some were wounded or killed.  Haaretz’s Aluf Benn wrote after the cease-fire that “The current confrontation broke out after Hamas tried to create a counter-perimeter on the Israeli side”… END_OF_DOCUMENT_TOKEN_TO_BE_REPLACED

The Israeli organization Zochrot [Remembrance] uploaded an extraordinary video on 27 December 2011 – the testimony of Amnon Neuman about the emptying of Palestinian villages and expelling the inhabitants to Gaza in the early years of the State of Israel, — which is posted here.

Thanks to Adam Horowitz of Mondoweiss, who posted this video here.

Here is a summary of some of the significant statements made – about 7 – 8 minutes into the video:

The testimony continued [looser transcript]: The men fled first, the men were running first … and we then expelled the women and children, they went to Gaza … In 1951 Moshe Dayan, IDF Chief of staff, ordered the expulsion of the remaining 2000 Arabs from Ashkelon together with the people of Huj … The people in Gaza wanted to return to their villages some returned at night to tend their grapevines in the dunes north of Gaza … we waited for them and we would shoot at them and kill them … Why did none of your friends not see this? Why only you and a few individuals reached these conclusions, and the others did not? I have no clear answer for that other than that we were praised so highly, so every person who was in the Palmach thought he was a hero, and they got drunk from that. I have no other explanation”.