Last month, Haaretz published an extensive and lengthy multi-part special report on the controvery — and fight — over the construction of a Museum of Tolerance on top of part of the ancient Mamilla Cemetary that became part of West Jerusalem and Israel as a result of the 1948 creation of the State of Israel in part of the former British Mandate of Palestine.

The Haaretz series was so exceptionally good that it was recently submitted on behalf of Palestinian families seeking redress for some of the related injustices via the UN Human Rights Council in Geneva.

But, it has not gotten much attention here in Israel — even the number of comments on the various articles in the Haaretz series is well below the norm.

The various parts of the Haaretz Special Report can now be consulted at one place on the Haaretz website, here.

Today, Nir Hasson reports in Haaretz that a new group, called “The Association for Muslim Affairs”, representing “the heads of various Muslim communities in Israel”, has filed a complaint to Israel’s State Comptroller Micha Lindenstrauss over the “handling of Muslim graves unearthed at the museum’s Jerusalem construction site”. Haaretz reports that “The complaint was filed by attorney Kais Nasser [who] asked Lindenstrauss to investigate both the way the remains were removed and the way the land was allocated to the Wiesenthal Center – which is building the museum – by the Israel Lands Administration and the Jerusalem municipality. He also asked Lindenstrauss to examine the role played by Ehud Olmert, who was mayor of Jerusalem and then a cabinet minister with responsibility for the ILA during the relevant period. Nasser argued that since Olmert traveled overseas at the Wiesenthal Center’s expense during this time, he may have had a conflict of interests. Nasser charged that the hasty removal of the remains violated a High Court of Justice order to carry out the work in a way that minimized damage to the graves. He also argued that the person in charge of the excavation, Dr. Alon Shavit, has a conflict of interests, as he is both an adviser to the Wiesenthal Center on the project and, as an archaeologist licensed by the Israel Antiquities Authority, a representative of the state”. This new report can be read in full here.

Members of prominent Palestinian families from Jerusalem have come out today in protest against plans to build a Museum of Tolerance on top of part of the ancient Mamilla Cemetery where their ancestors are buried. Until now, much of the opposition to the building plan came from Israeli and Jewish rights activists — including Danny Seidemann, a lawyer who founded Ir-Amim (which works for an equitably shared Jerusalem), and Gershon Baskin, co-Director of the Israeli Palestinian Center for Research and Information (IPCRI), who have argued, in part, that the construction offended their Jewish beliefs and values, and was against Jewish religious and moral teachings. They have tried, through the Israeli court system, and through appeals directed mainly to Israeli and international Jewish public opinion, to block the construction of the Museum of Tolerance on the Mamilla Cemetary in Jerusalem. Excavations began on the site in 2005. It is now surrounded by a high white metal fence, with security cameras posted all around, and armed guards in navy blue shirts and trousers, wearing black sunglasses. The initiative being taken by the Palestinian families today is reaching out to a larger audience, and includes filing a petition today in Geneva to various United Nations Human Rights bodies, and to the Paris-based United Nations Educational, Cultural and Scientific Organization (UNESCO), which is responsible for protecting the world’s cultural heritage. The petition is also being addressed to the Swiss Government, which is the repository for the Geneva Conventions. 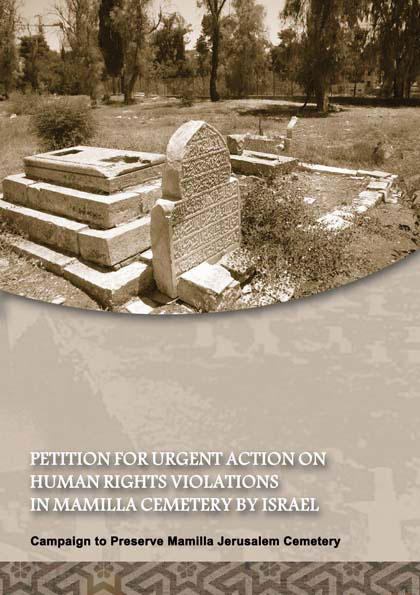 More information is available on the website of the New-York-based Center for Constitutional Rights, here. There is also a website for the 60 Palestinian families from Jerusalem who have launched this campaign, here.  This Mamilla Campaign website says that “Sixty individual petitioners who have attested that their ancestors … are interred in Mamilla (Ma’man Allah) Cemetery … including the following Jerusalem notables: * Abdullah Ali Koloti * Ahmad Agha Duzdar * Al-Amir Esa Bin Muhamad al-Hakari * Bader el-Din Zain * Ghaleb Jawad Ismail ‘Aref Musa Taher Abdul-Samad Ben Abdulatif Husseini * Jamal Eddine Al-Imam * Shams al-Din Muhammad ibn `Abdullah al-Dayri  al-Khalidi al-`Absi * Omar Saleh Zain * Qadi Burhan al-Din Ibn Nusayba * Qadi Mahmoud al-Khalidi * Salah El-Rahal al-Sadi * Shaykh Ahmad Ali Dajani * Shaykh Said Abdullah Ansari * TajuDin Abul Wafa Mohammad Ben ‘AlauDin ‘Ali Ben AbulWafa Al-Badri al-Husseini * Uthman Suleiman al-Kurdi * Yousef and Ali Beks Hallak * Yousef H.A. al-Kurd  Individual Petitioners (at 1 February 2010).” According to the Mamilla Campaign website, the petitioners also include Adnan Husseini, who is the Palestinian Authority’s appointed Governor of Jerusalem; AbdulQader Husseini, the son of the late Faisal Husseini, who was the PLO representative in Jerusalem and a member of the Palestinian team incorporated in the Jordanian delegation to the Madrid Peace Conference; Rafiq Husseini, an advisor to Palestinian President Mahmoud Abbas; Huda Imam, directrice of the Al-Quds University Center located in the Souk al-Qattanin in the Old City of East Jerusalem; and Sari Nusseibeh, head of Al-Quds University in Abu Dis. In a press conference held in Jerusalem this morning, moderated by Huda Imam, several of the signatories briefly spoke, according to Adnan Abdel Razek (a former UN staff member who is an expert on issues related to Palestinian property seized after the 1948 war), who attended:  He said that Asem Khalidi noted that a number of men from Saleh ed-Din’s army, who liberated Jerusalem from the Crusaders, were buried in the Mamilla Cemetary.  Hajj Toufiq Abu Zuhra, Director (“al-Qayam”) of the Mamilla Waqf explained his efforts to block the excavations in the Israeli Supreme Court, and he reported that he recently found wood shavings scattered on other areas of the Mamilla Cemetary, which he and others from the Mamilla Waqf went to clean up — he said he feared this indicated that other areas of the cemetary would be obliterated and claimed for other purposes.  And Adnan Husseini called what was happening immoral and illegal. Much of the momentum behind today’s initiative comes from Palestinians who grew up and who still live in the diaspora, many in the United States. Press conferences are being held in Jerusalem, Geneva, and Los Angeles, home of the Simon Wiesenthal Center which is moving forward with its plans to build the Museum of Tolerance on top of the Mamilla Cemetary. END_OF_DOCUMENT_TOKEN_TO_BE_REPLACED